I took a half-dayaction of sorts to join the 39th Annual Laguna Niguel Run in the Park and so happy to once again seen the Scouts of my home Troop, Troop 772, out there serving: 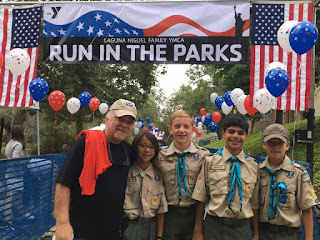 It was also fabulous to be witness to the Community coming together as they have.   I had a chance to chat with one of the many businesses that have been supportive of this noble cause and how she noted that over the last 9 years she's been in the City how it has grown at it has.      It is also a moment to be ever so appreciative of all that we cherish here in America as captured by this email from the US House Speaker, Paul Ryan:


What is unfortunate is that President Trump seems not to embrace some of the very points with policy moves including healthcare, the travel ban and the resulting backlash by the so-called nationalists.      What is also unfortunate, though, is the latest provocation out of North Korea as the North Koreans fired off another ballistic missile.   On this point I am with President Trump:  Doesn't the North Korean Leader have better things to do?   There is a response to that:  He wants his so-called Dynasty to continue ruling North Korea.   Where it all goes is anyone's guess especially as the President is off to Europe for the G20 and a meeting with Russian President Putin.   What Human Rights Watch noted is also of profound concern.

What I also saw, though, was courage in action over the past 24 hours as I was reflecting and gearing up for a challenging 3rd Quarter as the Silent March in Turkey was taking place in direction opposition to Edrogan autocratic tendencies and as the Chief Prosecutor in Venezuela has emerged as one of the strongest voices of opposition to the rule of Maduro.  The need to stay hopeful and do one's part to make a difference is ever so critical as I join our friends at Google to say: