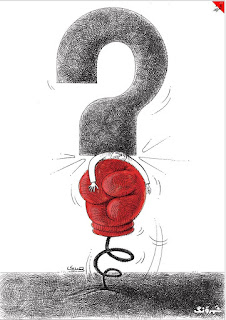 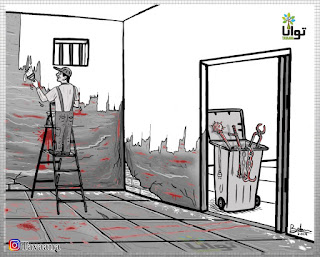 Yesterday was a day to remember all who were victims of Torture.    The depictions above honored who have been subject to torture.    I have had the honor to be supportive of the case of Nazanin Zargari-Ratcliff who has been held in Iran since 2016 and has been on a hunger strike.   Her husband, Richard, has also been on a hunger strike in front of the Iranian Embassy in London.   What I found so hillarious was a claim made by one of Hassan Rouhani's advisers equating Javad Zarif (subject to sanctions by the United States) to Nelson Mandela--I caught this by an Iranian Analyst and I just laughed: 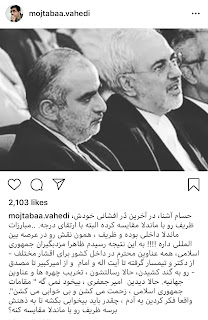 One great development was an open letter signed by 14 leading opposition figures inside Iran that have called for Khameini to resign and for the Islamic Republic to Go.     4 of them were interviewed by Iran-E-Farda's Dr. Alireza Nourizadeh.    I have been assigned a project by the Daily Outsider Team to translate and provide guidance on both letters and the expressions of support over the ensuing days.

This has also been a very distressing week as the World was witness to another tragic death of a father and a daughter trying to cross the Rio Bravo.     This image broke my heart: 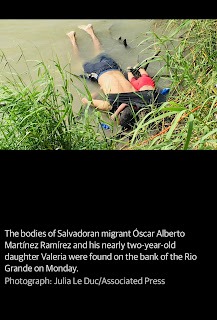 This is why this was so important to remember which MoveOn.Org sent out: 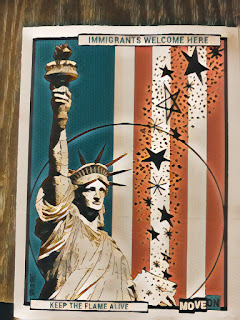 Some will say this is a "LIBERAL" thing--but this is an American as it comes because unless one is a Sioux or a Cheyenne or many of the other honored tribes of American Indians, we all came from somewhere.

As it has been quite a challenging week, I decided to be a bit upbeat to closeout my weekly #RandomThoughts with these thoughts I captured: 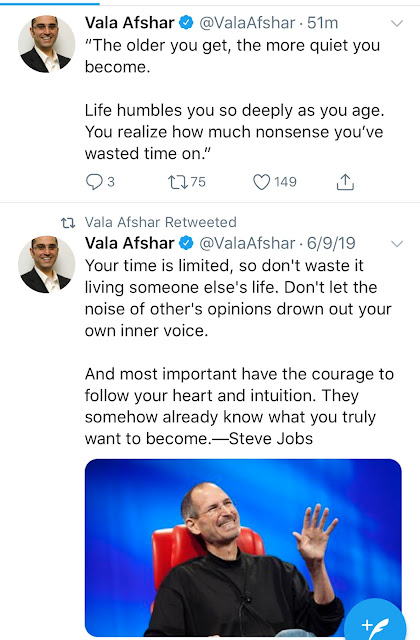 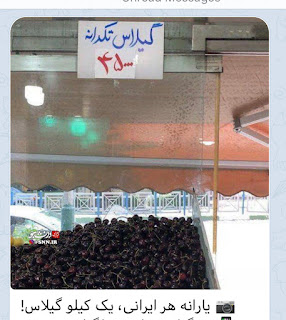 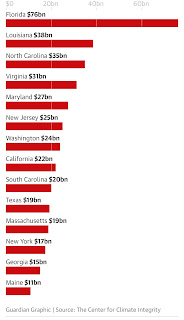 It has been another busy week as I have continued commitments for the Daily Outsider while I also took some time to work on Community Projects.  It was great to be witness to Community Spirit in Action as Sr. Jorge Olamendi decided to donate his remaining stock of his Family Market as he had to shut it down here in Laguna Niguel to the St. Timothy's Food Pantry Parish.   I had the pleasure to join the effort in helping to be supportive of the pick up and delivery.

As I have been working away, I decided to Headline this edition of "Random Thoughts" with three things : 1) A sense of the true realities in Iran ((that I picked up and released as a contribution to Donate a Photo); 2) How we should value Mother Earth (Courtesy the Environmental Expert & Campaigner Kaveh Madani & 3) The cost of defending rising sea levels in US States over the next thirty years (Courtesy The Guardian).      I am also very excited to take on the project of transforming the Daily Outsider to the next level as the Daily Outsider has been chosen as part of the Google News Initiative--Exciting times!!

I have also done what I can to be supportive of the campaign by Richard Radcliffe to be supportive of her Spouse that continues to be held hostage by Iran.   I made a point of citing the Prophet Mohammad as I tagged Javad Zarif and Hassan Rouhani--we have to do what is right although I realize they have no power and the only real power resides with Ayatollah Khamieni .   I have also been reading the letter by the 14 Activists and hope to have a transcription of the conversations the authors had with Iran-E-Farda soon for the Daily Outsider

This morning, though, has seen some disturbing news as a US Drone was shot down by Iran.    I was working away as I saw the coverage and placed a call to Congressman Rouda (My Congressman) to ask that we avoid war if at all possible--it will be a god-send for the regime--and I underscored that this has nothing to do with the fascist subhuman in charge in Iran right now.     As I was working away, I also caught this from two of the great Iranian Performers which is a dream for us all--a time where there is NO war ever and a dream for freedom with lyrics by the great Yaghma Golorouee whom I first got know back in 2015 when he was arrested and Mehdi Fallahti of Voice of America remembered him:


I will do what I can to help realize this dream through the commitments to the Daily Outsider and on-going engagement efforts.

It has been a busy weekend as I was also blessed to be reminded of all that I'm thankful for.    As I was working away, I caught a number of video clips about Iran.    I took comfort in this thought which is small comfort to those who are dealing with personal challenges.     Please enjoy the clips as I look forward to my continued  conversations with the World: 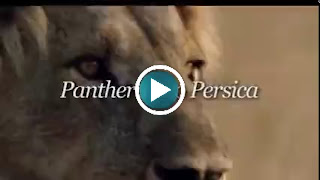 #RandomThoughts While Out & About....

Our team at the Daily Outsider has been quite busy this week. As I hope the community enjoys visiting the properties I decided to do a brief drop by w this. I did what I could to help elevate the conversation and hope the Government does its job.

As I joined the Twitter discussions yesterday and underscored how #WeWillNotForget. this was also a joyous time as my Son Graduate from Aliso Niguel High School.    The Daily Outsider Education Property will feature a Notation on what happened in our District--where I have the privilege to serve on the Finance and Facilities advisory Committee.   The Graduation ceremony was attended by Laguna Niguel and Aliso Viejo City Leaders and it was a joy to be witness to the future as the 718-Strong Class of 2019 walked on the stage as "....The Aliso Niguel High School Wolverine Stadium in Aliso Viejo swirled with teal, white and black graduation gowns and glittering dreams....For the 718 graduating seniors, Thursday, June 6 commemorated a hard-won diploma, a handshake from the principal, and a
walk offstage and into real life.."  as our Community leaders cheered them on..":

In Spite of all the challenges at hand, I continue to believe and know that the best is yet to come.....
Posted by TEST at 1:39 PM No comments: