Fathers' Day has officially arrived in the United States and once again Google has gone out to celebrate it in style as President Trump continued onward with the tradition with his annual Fathers' Day Proclamation.

As it is Fathers' Day,  I could not be more proud as I saw off my son to his first job.  He will be serving as an member of the Staff at Lost Valley teaching classes at Eagle University.   As the old saying goes, If we as parents make sure our children grow up to be better than us, then we have done our job.    That's probably the best Father's Day Gift one could ever hope for.   I also paid an early Father's Day Visit to my own Father as well to wish him Fathers' Day before getting back to work and picked up this on China Daily which was a fun read on Twitter:


It was also a day of Service as I was witness to the kids of Aliso Niguel Miracle 4 Kids fundraising for their Club and the Aliso Niguel Second Harvest Food Bank Club doing their quarterly Mobile Food Pantry at Zion Lutheran Church in Anaheim.   I had the pleasure to be witness to it all : 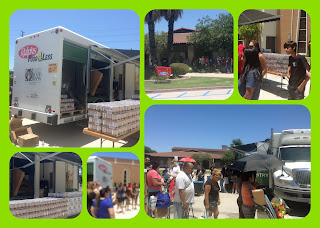 Some 8,000 pounds of food were distributed within an hour to 113 Families.  It was such a privilege to be witness to the outpouring of Community Spirit in action.    Some 315,000 people are food insecure in Orange County--one of the wealthiest counties in the United States if not the Nation.   I have the privilege to be able to serve as the Scouting For Food Co-Chair for 2017 which I hope will at least make somewhat of a difference.  I just finished off an outreach to the Leaders on this:

On behalf of myself and John Caruth, I wanted to briefly touch base and share some brief thoughts...but first and foremost, Hope all have been dealing with the heatwave that I gather will continue for a while yet--my eyes popped out when I saw it was 95 Degrees today!!

Let me first begin by expressing my profound appreciation To Greg Taylor for spearheading our District "down payment" for Scouting For Food as I gather (last data I saw was about 160 cans) as I am grateful to Leslie for facilitating the pick up as we gear up for this season of service for the less fortunate amongst us.    I also had the pleasure to join at the Mobile Food Pantry Distribution at Zion Lutheran Church in Anaheim that was sponsored by the Aliso Niguel High School Second Harvest Food Bank Club that saw some 8000 lbs of Food distributed to 113 families which was gone within an hour.   It underscores that our noble and just cause is ever so critical today.    I hope that the the Second Harvest Food Bank Club is able to help spreahead a drive.

I wish you all a fab Summer as I hope all continue to start thinking about this here as we all hit the ground running starting in August so that we can help hopefully exceed the 2016 numbers in support of Second Harvest Food Bank.     Please reach out to either myself or John Caruth with any questions or concerns.

It was also quite a week around our World.   Although enough is noted with the on-going curation of The Daily Outsider, I could not help but reflect upon the tragedy in London.   It was quite a week as it underscored how the politics of austerity seems to have potentially run its' course in the UK.  IT was also a week that saw Queen Elizabeth show how she kept her "ear to the ground" as she went to see the victims along with her Grand Son, Prince William.    How the British Prime Minister was  attacked as savagely as she was  was quite a scene to be witness to.   It is also quite remarkable how Saudi Arabia is playing the bully trying to bring down Qatar--I wrote on Twitter about my hope that Qatar won't succumb to the blackmail by Saudi Arabia and its' satellite states: Bahrain, Egypt and Yemen and a few others.

Meanwhile, back here in the US, I was blown away at the devastation in Kansas which may well be a blueprint what is at hand Nationally here in the United States--as the blueprint of what has been thought up at the Heritage Foundation is being implemented.     This was also quite a weekend as I caught All the President's Men, Revisited, which was produced by Robert Redford about Richard Nixon and the vast criminal enterprise he ran inside the White house and the team @ The Daily Outsider featured it as a "View of the Week"--a very powerful 1 hour.    This is also as Showtime (Part of Viacom & CBS) is featuring the Putin Interviews done by Oliver Stone featuring Vladimir Putin as Putin is clearly aware and has a keen understanding of the internal dynamics of the United States today.   This is as President Trump continues to reverse the Obama Legacy with reversals on Cuba, Iran, the Environment, etc. etc.

Remaining Hopeful as I look forward to the new week with all its' possibilities!!!
Posted by TEST at 12:37 AM