It has been quite an unfortunate week in our World with the Terrorist Attack in France that claimed the life of a Police Officer as France gears up to go to the Polls.   This is also as the continued challenges in Iraq and Syria lingers on--and as our team was finishing off its' assessment before going "dark" for Earth Day W-End, we saw a very distressing report out of Afghanistan as some 50 Afghan Soldiers were killed in a suicide attack.    This is also as the Hunger Strike by Palestinian Prisoners continued which disappeared off the headlines.    The Haaretz' Gideon Levy reflected upon the tragedy of Palestine with this column:

Some of the statistics were staggering as noted below: 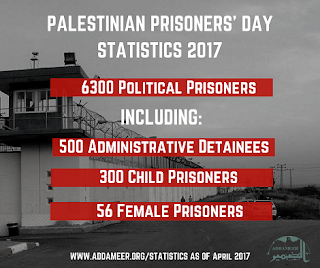 The team did have fun, though--because we've got to to be able to help live up to our mission to change the conversation about our World.  It was fun to be able to work on helping to curate the network as the latest out of +Global Citizen  was featured on the eve of Earth Day 2017.        My Community of Laguna Niguel is commemorating Earth Day as Community Members and City Leaders will be at the Niguel Botanical Preserve to help preserve a local treasure that is home to some of the rare California Plants.

What continues to sustain me, though, is the Community here in South Orange County.    I began the day early as I was at our Community's Catholic Parish Food Pantry helping to process the stock we had as we geared up for a new week of service.    As I reflected upon this day and worked to As I write this, I am in downtown San Juan Capistrano right across from Mission San Juan Capistrano.   This is as right up the street, San Juan Hills Elementary School is having a carnival.   San Juan Hills is the oldest School in Orange County.   It is just such a privilege to be witness to it all as I alwaays marvel at the history of this historic district--and as I captured some images of the "faces of California" I released to my Facebook Wall:

I had the pleasure to drive my son and two of his friends to this Community Commitment as they were supporting this event thanks to their Spanish Teacher who gave them this opportunity to serve . I was blown away by their deep and engaging knowledge of the World.    I only took the liberty to "chime" in to remind them that they are the change they seek--and they can do their part.    I trust it resonated.     I see it as our responsibility and calling to make sure that the young understand that in order to in the end carry on.

Today was also quite a day as Queen Elizabeth II of the UK celebrated her 91st Birthday.    I picked this up on Twitter while working away which I also released to my Personal Facebook Wall earlier today:

As I saw this very crucial admonition from Her Majesty, I could not help but wonder about what is currently prevailing in Washington--especially on this Earth Day.    I saw, for instance, that Donald Trump Jr. is scheduled to go hunting in Montana on Earth Day.

I wanted to end this with two admonitions I picked up which underscores how we should continue to be positive about our World and our outlook:


“When one door closes,
another opens;
but we often look so long
and so regretfully
upon the closed door
that we do not see
the one which has opened for us.”
~ Alexander Graham Bell

“Whenever you find yourself
doubting how far you can go,
just remember how far you have come.
Remember everything you have faced,
all the battles you have won,
and all the fears you have overcome.”
~ Author Unknown

Happy Earth Day To All!!