I was mostly on the road yesterday and when I returned to my office, I saw how President Sisi of Egypt was given the red carpet treatment by President Trump as he visited the White House.    One of the first series of Notations I helped edit out for the early editions of The Daily Outsider was this which I "dug up":

As I saw #Sisi being praised by @POTUS , I tracked down this "blast from the past": https://t.co/YKbLFWMTgV by @mikepouraryan on @LinkedIn
— Mike Pouraryan (@mikepouraryan) April 4, 2017


I still can't get over how his Aunt reflected upon how lucky they felt that he was not executed and only given a 5-year jail sentence.      The defiance of him and his sister was just striking:

It is disheartening to be witness to it all--this is why some interesting developments are taking place including the resistance to the Neil Gorsuch nomination as epitomized by what will be happening over the course of April by the brainchild of a few Kennedy School Graduate Students:  The Resistance School.

Today also saw a very nice public relations play in the White House.   I was glad to see the President donate his first Quarter salary to the National Park Service--but this gesture does not wash away the draconian cuts that has been proposed in Education, Health, the Arts and Service.    I helped release a Notations on National Service that will be the headline throughout the Daily Outsider Properties.   There was also a lot of coverage I reviewed on the President's Staff and their financials--including the estimated $ 200 Million Income that Ivanka Trump and her husband made.    In my view, they are to be commended for wanting to come into Government and being subject to such scrutiny--such coverage negates the debate on policy that seems to be not be forthcoming unless one consults Vox or maybe even BuzzFeed

Beyond the shores of the United States, the World continues to be as challenging as ever.   As I am finishing off these thoughts, the horrific scenes out of Russia was a stark reminder of the challenges faced in our World.   .   Despite all the controveries, I am with Tom Friedman as he argued in "Thank You for being Late" that the World must make sure Russia does not become too unstable in spite of Vladimir Putin's very problematic policies.    Reports are that the bomber was from one of the former Soviet Muslim Republics.    Europe's challenges continue with no apparent end in sight as the UK has begun the painful goodbye from the European Union as it deals with its' own Unity Challenges.   Spain is potentially dealing with a breakup as Catalonia, its' richest region, wants independence and as it begins its' assertive stance regarding Gibraltar.   The United States seems to have implicitly embraced Assad as Hezbollah continues to be on the ascendancy as documented in yesterday's Wall Street Journal.    According to the Wall Street Journal, Hezbollah is in a solid position to participate in the estimated $ 180 Billion Dollar    Meanwhile, I just saw a report as I was finishing off these thoughts about Chinese Plans to build a new City that would be three times the size of New York--interesting as the Chinese President is about to meet up President Trump in Florida.

As I was researching away, I ran across this from the "Grid" From Rachel Carson.   Her admonition to us all was about Nature itself--which continues to be under assault in large measure thanks to the measures being taken in Washington.    I would argue that it also holds true about our World Today.   Unfortunately, though, it is small comfort to those who languish in the dungeons of Egypt, Iran, Syria and Turkey today.   It is small comfort to the 65 Million People who have been driven from their homes due to conflicts and Wars.   It is of no comfort to those who have lost loved ones in all the conflicts.    The need to remain hopeful, though, is ever so critical today more than ever: 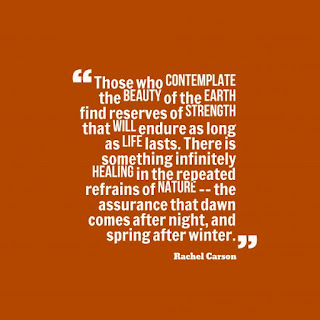 Onward to the New Quarter with all its' possibilities....