View of the Week: A "Blast From the Recent Past" 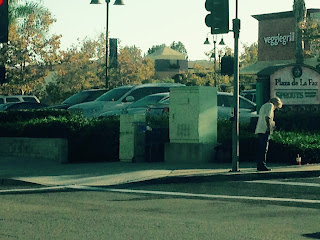 For this edition of "View of the Week", we decided to feature a recent "Blast From the Recent Past" on this week.   Our team was reflecting upon this as the team captured this recent image of one of the street corner folks.

Our founder published a column in the Liberal OC which we found of special interest to feature here which we hope is of interest originally published and available here--our plan is to publish a compilation of these columns in a Book soon:

It has been an absolutely tumultuous and exciting summer, to say the least.
As kids go back to school, I reflected upon the Summer as I had the good fortune to hang out with my Son throughout the Summer. For me, the climax of the Summer was when I escorted my Son to the “Rule The Pool” at the Crown Valley Pool in the City of Laguna Niguel. As I saw the kids having the time of their life, I started walking around the Niguel Botanical Reserve and truly marveled at such a gem of a resource right in the middle of the City. I was in awe!!!
As I marveled at the beauty, I thought about the City of Laguna Niguel. I saw as Laguna Niguel’s new City Hall took shape and what a beautiful building it has turned out to be. I remember when I had the privilege to witness when the City Council broke ground. The new City Hall was built on time, on budget with no debt being incurred by the city. As I thought about the city, how it has continued to maintain a reasonable level of service while navigating through rather challenging times, I wondered whether lessons can be learnt from the city has done that could be translated into the National Scene.