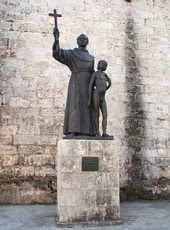 St. Timothy's Catholic Parish Church Bells rang today.    It is part of a transformation of the Parish that is due to begin over the ensuing months as the Food Pantry will be expanded and the kitchen will be transformed.    It is also a  good day here in South Orange County as the Holy Father formally declares Junipero Serra a Saint.   Festivities will be going on throughout Orange County and the Chapel will be open for a tour this coming Friday starting at 2:00 PM at the Mission Basicilla.    There has been quite a bit of controversy on his role and the vehement opposition that Native Americans have had.      What is clear is that he made a difference and in more ways helped to shape the United States and the California that has evolved as it has.

This is also a day to remember a victim and a call for Justice.  A concerted campaign has been launched to ask the Orange County District Attorney's Office to investigate Killing of Shayan Mazroei as  a hate Crime.     He was killed in Laguna Niguel a number of weeks ago.

The petition on @Change.org  has garnered over 3,800 signatures.  There is a press conference scheduled for this coming Monday, September 28 at noon in Irvine as reported on the Facebook Page, Justice For Shayan Mazroei, earlier today: