Random Thoughts While On the Prowl.....

It was a challenging weekend as I attended the funeral mass of a member of  our extended Aliso Niguel High School Family who committed suicide, Kyle Escobar and as I was reflecting upon the very challenging week which saw another tragedy befalling Iran with the crash of an Airline operated by Asseman Airlines on a domestic Flight.

As I working away on the Social Media  "Grid", I picked up this from the daughter of Mir Hossein Mousavi on the plight of the people of the Middle East: 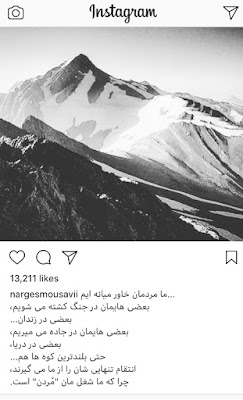 I translated the poem and released it to Twitter over the week-end that I noted below:


“We are from the Middle East ; some of us die because of war ; on the road ; in the dungeons ; some even on the mountains ⛰; they exact revenge as it is only our job to die “ a rough translation of this posted by the daughter of #mirhosseinmousavi fyi @JZarif @HassanRouhani 😢😢 pic.twitter.com/3ibLYZ3VdV
— Mike Pouraryan (@mikepouraryan) February 18, 2018