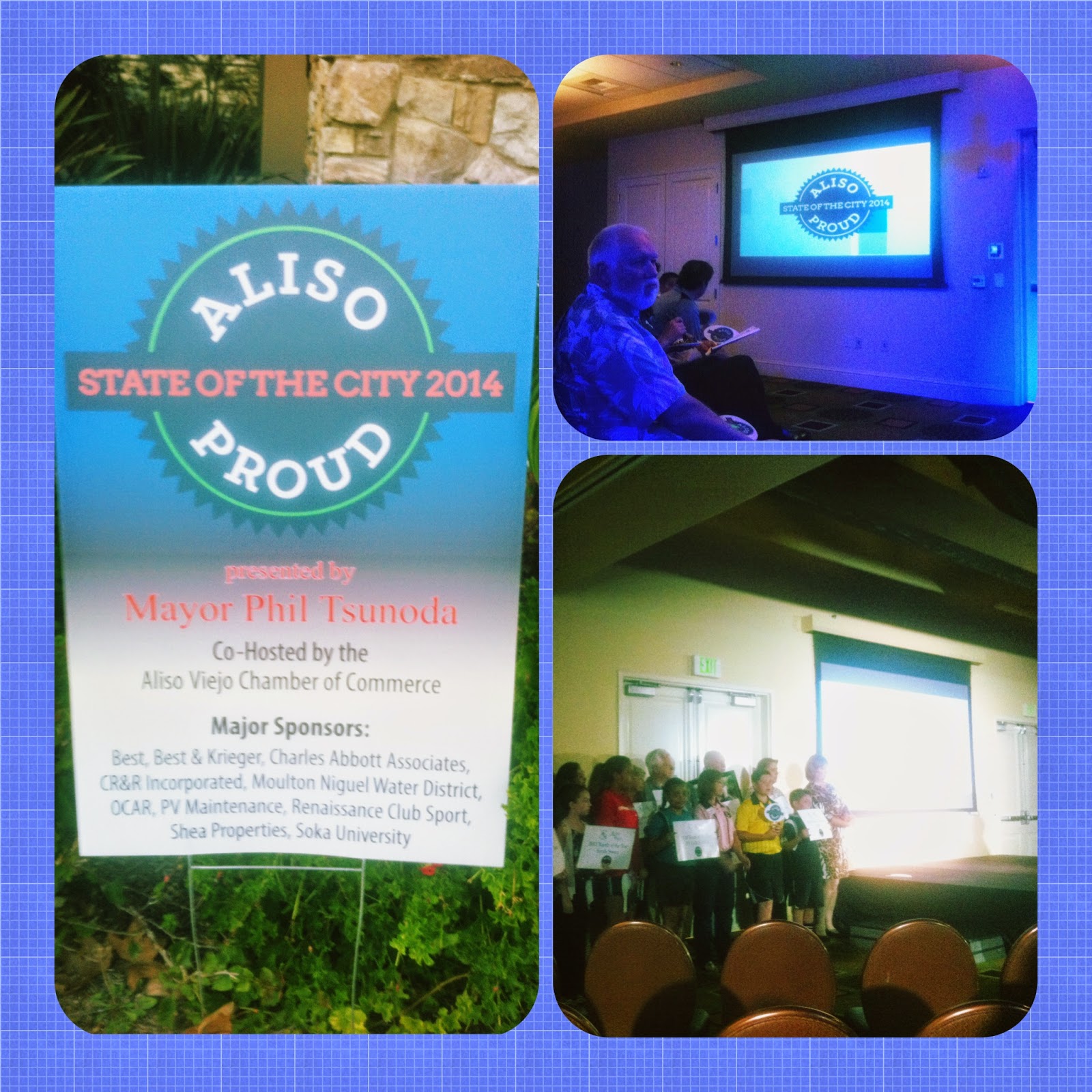 We here @ "Outsiders" joined the 2014 State of the City Address at the Aliso Viejo Town Center on October 16.   The Mayor, Phil Tsunoda, shared a number of key statistics which was of note:


The sense of pride as exemplified by the "Aliso Proud" Fans was evident.   The City boasts a number of major businesses and some of the leading public schools for Capistrano Unified are located in the District.    In addition, the City's report reflected a number of creative initiatives  as a Homeless Liaison Officer to facilitate assistance to the homeless and the creation of a Tracking Automated and Graffiti Reporting System.

The audience was also engaged by the Mayor as he led the audience in a combination  Jeopardy/Who Wants to be a Millionaire Game which in turn yielded some fabulous gift cards from local businesses.     The event was sponsored by the Aliso Viejo Chamber of Commerce which boosts some 170 Businesses since it was formed around 3 years ago according to its' President.    At this event, Community Leaders (both young and old) were honored and the 2014 Citizen of the Year and Youth of the Year were both named.

This week also saw the Great California Shakeout.   Schools throughout South Orange County participated in the exercise.  As noted by the Principal at Aliso Viejo Middle School, "..students  practiced drop, cover, and hold and then evacuate to the blacktop for a disaster drill and will not be answering the phones until the drill is over...."  It was emphasized during guidance to families that, "....as part of our School Safety Plan, in the event of a real emergency, students will only be released to the parents and/or other adults listed as emergency contacts for the student.  If you have not done so, please ensure that all of your information has been updated through parent portal. You should assume that in an actual emergency, telephone communication may not be possible and should make plans in advance with friends and neighbors to help retrieve your children. "    For more information please visit: http://www.shakeout.org/california/

The City of Laguna Niguel will also be holding a readiness exercise on October 18 that would be focused on the set up of an incident command system in the event the Community has to be faced with the calamity.    In Earthquake Country, it is not a question of if--but when.