Out & About with some #RandomThoughts For the Week-End 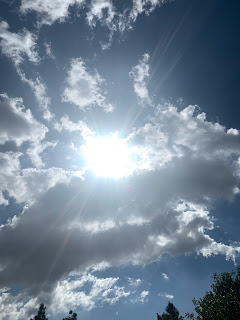 It has been quite a week as earlier this week I finished some notations on the 42nd Anniversary of the Revolution that brought upon Darkness in Iran--but I have also been witness to how things are great as I have been witness to quite a week in Orange County.   The image I captured above while in town yesterday epitomizes this sense of hope as  I  leave thoughts on the impending potential recall of California Governor Gavin Newsom, the Donald Trump Impeachment and other challenges for another time.

I have joined Operations Independence here in Orange County as Orange County has embarked upon a county-wide campaign to vaccinate all--with a focus on Tier 1A ((Healthcare Workers & All other 65)).  I was able to secure my first dose due to being on Staff along with a number of close family members.

As I am away again on this quest for service, I caught this during my engagements which embraced what continues to drive me in regards to all projects including my Doctorate quest, work in Virtual Education, navigating the challenges of the Daily Outsider and other on-going projects:

While out & About this week, I decided to capture the following  recently as I stay engaged with UC Davis --where my son is a Student.   This is a sampling of the commitment there is to our future that continues to sustain my sense of hope:
As we prepare to return to in-person instruction in the fall, we announced this week we had a record number of applications for admission: 105,850 for freshman and transfer admission, up 11.7 percent over last year’s 94,763, contributing to a record number of applications for the UC system as a whole.The diversity among our UC Davis applicants is impressive. Here’s what Ebony Lewis, executive director of Undergraduate Admissions, had to say: “Our future Aggies come from all walks of life and reflect a broad diversity of thought, experiences, communities and backgrounds that embody a spirit of inclusive excellence.”Among California residents seeking freshman admission, 36.7 percent are from historically underrepresented groups (African American, American Indian, Chicano/Latino and Pacific Islander), and among domestic students seeking transfer admission, 34.5 percent are from historically underrepresented groups.Among California freshman and California Community College transfer applicants, 41 percent are from low-income families, and 42 percent would be in the first generation of their family to graduate from a four-year college.
I had the pleasure to drop a note to the UC Davis Chancellor and he was gracious enough to send a very kind response back--I told him that it is the least I could do in my response as I told him that I looked forward to the pleasure to shake his hand in appreciation someday.
Remaining every so hopeful.....
Posted by TEST at 12:00 AM