It has been quite a week!!

We have had some great weather in California that prompted me to break out my sweaters and yes even turn on the heater--it also rained again this morning!!!    The Mountains have Snow and some say that we in California are in good shape after years of drought.    But, the broader challenge of climate change remains as I went back and revisited this chart about my family's predicament and climate change: 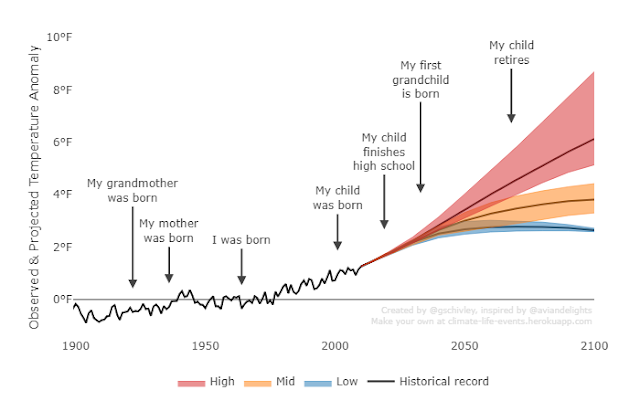 I have also been trying to get some discipline back with my "Screen Time" and was "kind of glad" to see this data that I track.   We need to have a life beyond Digital--although the Work I support for the Daily Outsider (including help with the property curations & the daily Social Media curations/Media Reviews):


I was so glad to be supportive as I joined the hashtag #standwithjeff as he went after the National Inquirer Hard.  He stood up for many ordinary faces--and I am with Scott Galloway of the NYU Stern School when he noted how we have to make sure that we are aware of how truly digitized our lives are and how mistakes can ruin lives--Teens are dealing with it all the team and we must act now no doubt.   I look forward to reflecting further on it.

As I close out these thoughts, I picked this up--I don't feel really too bad as I helped to start The Daily Outsider-I do wonder at times,though:

This is also the eve of the 40th Anniversary of the Iranian Revolution of 1979 that has caused so much misery and pain for Iran and the World. One of the best indictments of the 40-years of Islamic Rule in Iran was done by the Voice Of America's Farsi Service. Mehdi Fallahati has done a fantastic job of exposing the corruption and murderous reign of the Islamic Republic. The fraud that the current President noted (on how he advocated to cut off Armed Forces' Pensioners) was hard to listen to. What is also so sad is how Rouhani did not fulfill a single campaign promise that prompted some 24 Million Iranians to vote for him. The numbers his budget has given one religious institution is more than the budget for 22 Provinces!!! The program is in Farsi but the need to help note the great work he's done is critical. I also was grateful to one of the leading Iranian-Americans, Dr. Firouz Naderi, as he underscored the need for many of us Iranian @ordinaryfaces believe:

#WeWillReClaimIran
Posted by TEST at 12:01 PM