Out & About In Our World With #RandomThoughts


I have been working away on commitments at the Daily Outsider as I reflected upon quite a week, quite a month and quite a year.   I decided to feature a talk by one of the leading opponents of the Islamic Republic about the moral bankruptcy of the regime in Iran, Mohsen Kadivar.   I note this especially as I saw reports about Nazanin Zargari, the British-Iranian Expat being granted a three-day release to visit her daughter after two years--I was extremely proud of doing my small part to help make sure the World did not forget about her plight.

I note this because Iran is in a State of Flux exemplified by what I released in my Twitter Feed earlier in the week:

Dr.Kadivar's speech in the aftermath of the Green Movement resonates even more today especially as he point-by-point rejected the assertions by the Islamic Republic especially in light of what he specifically noted how Imam Ali, in his letter in his book (No. 53), about how Democracy and human rights should have been at the heart of it and never violate Human Rights.      What I was so disturbed by was how two of the leading Human Rights Lawyers were hauled away in handcuffs and legcuffs in Prison Garbs in front of their families for detention--and as the leading Human Rights Lawyer Nasrin Soutodeh continues to be in detention and I saw that her residence was raided in the middle of the night.       Although Dr. Kadivar's speech is in Farsi, the speech is very hard to listen to especially in light of the profound challenges Iranians face right now.       One key yardstick is simply this:  The total collapse of Iran's Currency, the Rial.     I nearly broke down when I listened to his speech on how the Islamic Republic has driven Iran to the ground.

It was also quite a 48 hours in the United States in the aftermath of the Cohen and Manafort convictions.    The debate continues and the spin continues--but I saw on the Economist that also was extremely problematic--and now as the President just came out and said that if he's impeached, the market will crash & now Giuliani saying that the people will revolt:

As I have been reflecting upon this profound number of weeks, what gave me hope was what I was witness to in my Community yet again as the Kids went back to School: 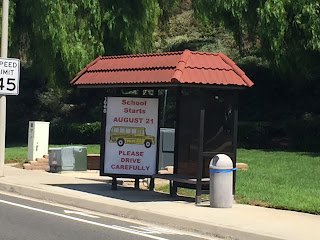 Despite the profound challenges, I continue to remain hopeful--I have no choice....