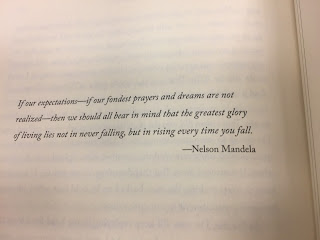 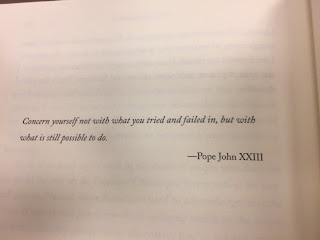 I finished off Hillary Clinton's Memoir On the 2016 Campaign.   Not withstanding some of the interpretations I have seen, one has to actually read the over 500 pages because there is a lot of to digest and reflect upon.    Her selections of thoughts especially struck me as I decided to capture two of them here.   This is as I also had a chance to read David Brooks' The Road to Character that at its' heart noted the need for Humility always.     It is in the end about staying humble, never giving up, thinking about the possibilities and rising up--isn't it?

As I reflected upon the day, what I saw from Teddy Roosevelt was also poignant:

It is not the critic who counts; not the man who points out how the strong man stumbles, or where the doer of deeds could have done them better. The credit belongs to the man who is actually in the arena, whose face is marred by dust and sweat and blood; who strives valiantly; who errs, who comes short again and again, because there is no effort without error and shortcoming; but who does actually strive to do the deeds; who knows great enthusiasms, the great devotions; who spends himself in a worthy cause; who at the best knows in the end the triumph of high achievement, and who at the worst, if he fails, at least fails while daring greatly, so that his place shall never be with those cold and timid souls who neither know victory nor defeat.