Out & About With Some M-End #RandomThoughts 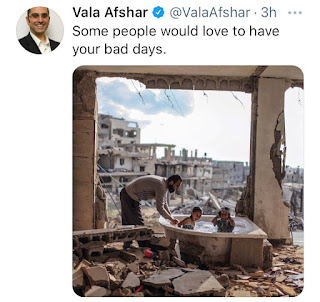 It has been a very challenging few weeks.  I decided to take comfort in this thought from the great and eloquent Vala Afshar to remind myself of all that I am blessed.   I pulled some #RandomThoughts on Iran along with other thoughts as I look forward to the ongoing engagement at hand:

You only live once, but if you do it right, once is enough. -Mae West

When we strive to become better than we are, everything around us becomes better too.

It’s interesting how infrequently money comes up in Meditations. Here was a guy who had incredible wealth, whose predecessors obsessed over it and found it to be a source of both pleasure and conflict, and yet in his private meditations, it hardly comes up at all.

In his actions, we see Marcus was conscious of money, but primarily as a means to an end not as an end to itself. He was more interested in what it could do for other people. He declined gifts and inheritances. He gave liberally to the poor. He sold off palace furnishings at Rome’s lowest point.

But perhaps these attitudes are related. Because Marcus did not think particularly highly of money, he was comfortable in his ability to be generous. At one point, he told the Senate that he did not regard himself in possession of any of his wealth. It belongs to the people, he said, even the house I live in is not mine.

There can be virtue in frugality. Cleanthes seemed to be an incredibly hard worker—a manual laborer, no less—who spent little of what he earned. But frugality and diligence with money can also be a vice. It makes finances loom large in our lives, makes us throw good time after bad (after all, it’s not enough just to earn money, then we have to manage it and make it grow). We can come to identify with the fruits of our labor and our success, which makes it hard to spend (even on necessary things), hard to be generous, hard to share.

Money isn’t rare. There is nothing precious about precious stones. It is all incredibly common. Most of the people who have it are not impressive, most of the great fortunes are, in fact, the opposite of great. The way to think about money is as a tool, and what did the Stoics use their tools for? To do good. To get better. To make the world better.

We can do the same