February is before Us--I decided to work on some #RandomThoughts on Iran opening it up with the Song "Deng" on the legacy of the horrific war between Iran & Iraq.

The lyrics of the Song are I believe in the local Arabic Dialectic in the South of Iran that depicts the horrors of War.    Iran's South is yet to be rebuilt after over 30 years as it continues to grapple with destroyed infrastructure and Agriculture's Destruction.    The scenes are heart breaking to see.

The regime in Iran is also beginning a celebration of what it refers to as "Fajr".    It is the ten days that began with the return of Khomeini to Iran and the success of the Revolution.   This has seen Regime Officials paying homage to Khomeini appearing with his grandson--the depictions below reflect the President, the head of the Judiciary and the Red Crescent Organization appearing:

It is absolutely sickening to see such images-as poverty continues to spread like cancer, inflation looms as the Economy teeters on the brink of collapse.    Leading Human Rights Activists and Freedom Fighters continue to languish in Prison.    What is also so tragic is that even one of the rare voices of dissent and courage was summoned to Court and had to post bail to be released--and she is a Deputy in the Parliament: 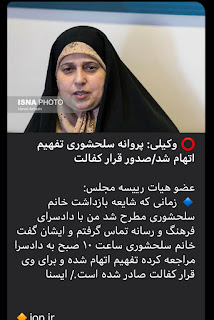 In the midst of all the tragedy I've been witness to, All I could do is to take refuge in Poetry--this I ran across was from Coach Wooden as I close out this weekly #RandomThoughts:

OPPORTUNITY
With doubt and dismay
you are smitten,
You think there's no chance
for you, son?
Why, the best book
hasn't been written
The best race hasn't been run,
The best score hasn't
been made yet,
The best song hasn't
been sung,
The best tune hasn't
been played yet,
Cheer up,
for the world is young!
------
No chance? Wy the world
is just eager
For things that you
ought to create
Its store of true wealth
is still meager
Its needs are incessant
and great,
It yearns for more power
and beauty
More laughter and love
and romance,
More loyalty, labor and duty,
No chance--why there's
nothing but chance!
------
For the best verse hasn't
been rhymed yet,
The best house hasn't
been planned,
The highest peak hasn't
been climbed yet,
The mightiest rivers
aren't spanned,
Don't worry and fret,
faint hearted,
The chances have
just begun,
For the Best jobs haven't
been started,
The Best work hasn't
been done.