Out & About w/ #RandomThoughts on Being Witness to History....

It has been a historic weekend in America.    As I was being supportive of special projects for the Daily Outsider, I wanted to share some of the "discourse" I captured while on Social Media.

The first one below is from the Writer at Large at the Bulwark.   Tim Miller was one of the group of Never-Trumpers in the Conservative Movement that in my view was one of the reasons President Trump was defeated--I am proud to note I am a Bulwark Plus member and what he noted about Joe Biden was spot on: 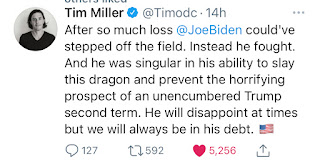 He's never given up and given in.  He endured the loss of his first love, a daughter and a son--fought back from an brain stroke hard and went on to a distinguished career of service.   He notes how he's the luckiest man in the World to have loved twice--and I am confident this will show in how he will govern.   There is no doubt he will disappoint--but he will lead the way in learning to disagree without being disagreeable.
As I continued my daily "Virtual walkabout" and assessments, what I found especially striking was what the Mayor of Paris noted below:

When she said, "..Welcome Back America"--it struck a cord.    It was unfortunate when I saw the likes of Lindsey Graham, Roy Blunt (The Senator from Missouri), Kevin McCarthy and others continue to press President Trump to fight.    But, for me, what hilarious was what the great Kaltoons (and I have been a diehart fan ) underscored as President Trump promised to fight on: 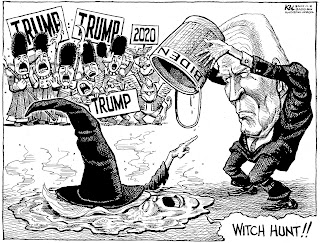 There is of course, Iran.    Some have been speculating that Joe Biden will go "soft" on Iran--I don't believe it at this stage--but vigilance is important because the reality of Iran was captured by this depiction by the leading Iranian Cartoonist for Iran Wire Magazine Below: 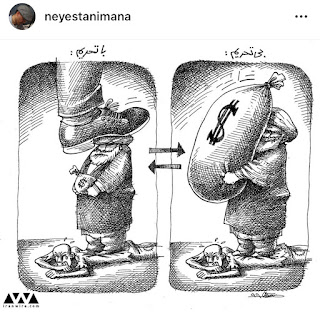 There is, then, the matter of the Election itself and claims of Fraud.   As this stage, I won't speculate about what goes on in other States in the United States.   But, I can attest that in California (and especially Orange County, California) fraud and other "stuff" alleged by President Trump and his supporters simply does not happen.   I just served in my 12th Election as an Canvass Board member and helped with canvassing over 66,000 Ballots over a 16 hour period.   It is a painstaking meticulous process and it was very gratifying to see praise on the work of those of us who were involved in it.   I look forward to my Election Day Diary which I will be publishing soon as I remain hopeful about a better day for America and the World.
Posted by TEST at 1:39 PM